OPO  -  Monitoring the reflectivity and scattering of telescope's coatings

OPO is a specialized research and development workshop providing optical solutions to industry and institutes.

It is grounded on the long experience of Dr. Daniel Malaise who worked as an astronomer in the University of Liège with Prof. Swings, in the Harvard College Observatory with Pr. F. Whipple, and in Paris Meudon with Pr. F. Praderie.


As scientifical and technical director of IAL Space , Daniel Malaise designed several major instruments for astronomical and earth observation from the European Space Agency , such as Giotto (Halley Multicolor Camera) and Hipparcos. He then turned to space industry founding Spacebel in 1988, a daughter company of Matra Espace, where he supervised, among others, the Silex, EIT and Mipas projects. After that he launched DMO Optical solutions , where he developed the highly reputed optical metrology instrument Iris in 1996 ( Read the newspaper report on DMO here ), and in 2002 he started his current company OPO Optical metrology instruments .

As a lifelong astronomer, Daniel Malaise cares very much providing quality control instruments that match the needs of modern telescopes. He has put all his past experience in designing a specular multi wavelength reflectometer specifically dedicated to his fellows astronomers. This is called the CT7 , reminding the 7 wavelength bands it operates. The design of this instrument was accompanied by a thorough theoretical study of the problem . Hence, for the first time astronomers can rely on instruments that, from the very start, have been thought solely for their purpose, with no economical or other bias; and the chosen solutions are fully and amply justified by rational arguments as it should always be the case in scientific fields. 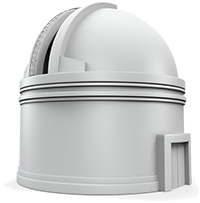 The heart of competence of OPO is the mastering of surface metrology and a deep knowledge of scattering processes and of surface defects detection and characterization: microroughness, cleanliness measurement, etc. We are very proud to offer the most accurate metrology instruments in our field, that are the outcome of 50-year experience in optical metrology. The CT7 , which stays our flagship, is already in use at numerous observatories and institutes accross the world . It is a very stable and very strong instrument that has been tried and tested for 10 years already.

The history of our most recent activities has gone like this:

• The first version of the CT7 reflectometer / scatterometer was launched in 2010, a first major upgrade took place in 2012, a second in 2016 and the current fourth version was released in the end of 2020.
• The newly developed CT7a reflectometer / scatterometer was first released in may 2020 and offers solid prospects of evolution for ever better measurements.
• In january 2021, we released the "Cherenkov version" of the CT7 , capable of highly accurate measures of the reflectivity at wavelength bands down to 308nm .

For the software and electronics portions, we are cooperating with our longtime friend and associate Pawel Woszczyk , and his company A1Pixel . Pawel has worked with Daniel Malaise and OPO on all kind of projects since 30 years.

With his long experience in cameras and optical apparatus, he develops and manages the software and electronics of the CT7 and CT7a . He is providing technical support for the customers and a great help in the making of the documentation.

This website was developed and is hosted and maintained by André Malaise, as Sapiens consulting, who has no responsability for content and materiel offered over the website, or for the products or services offered by OPO.


Our instruments are currently in use at, among others, the following observatories and institutes: 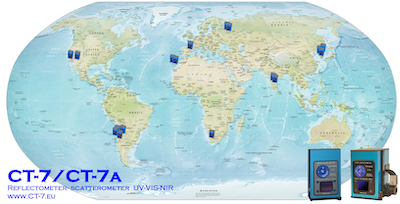